this edition of framework:afield, entitled dirty tracks, has been produced in germany by stefan paulus. stefan writes about the process of piecing this work together from his psychogeographic drifts:

// this show is dedicated to the unknown musicians I have recorded over the past years during what guy debord describes as ‘dÃ©rives’ or ‘psychogeographic drifts’: the experimental exploration of the environment through coincidence and other methods to disturb your normal behaviorÂ  or motivations as a pedestrian or car driver. drifting is the search for an ecstatic moment or ‘ecstatic truth’, like werner herzog says. if I get on a track â€“ I try to document what I find //

// sometimes I had to borrow a cellphone, or I used a crappy digital cam to record //Â  thatâ€™s why this show isnÂ´t a high-end surround sound field reportÂ  // this radio show is about these ecstatic momentsÂ  // for example: I followed people to a bar in hungary … and some solo entertainer is playing … people drink beer and dance // I walked through a block party and ended up in a street riot … people dance to reggae music and you hear bottles shattering on police cars // you will hear music from some gatherings, a powwow, indonesian rituals, music from a record shop in turkey, from hippy parties or bonfire music in the mid-westÂ  //

// some of these records are done before GPS was in every technical instrument â€¦ thatÂ´s why this show isnÂ´t a sound-mapping cartography // most of the time I don’t even know what the people are singing about and I donÂ´t know the names of the bands â€“ if they even have names // sometimes I canâ€™t locate the places anymore, because the goal of psychogeography is to get lost, and to create an altering reality // 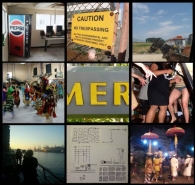 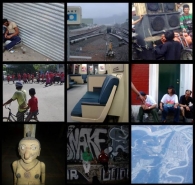 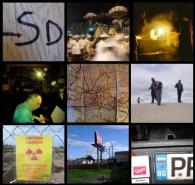